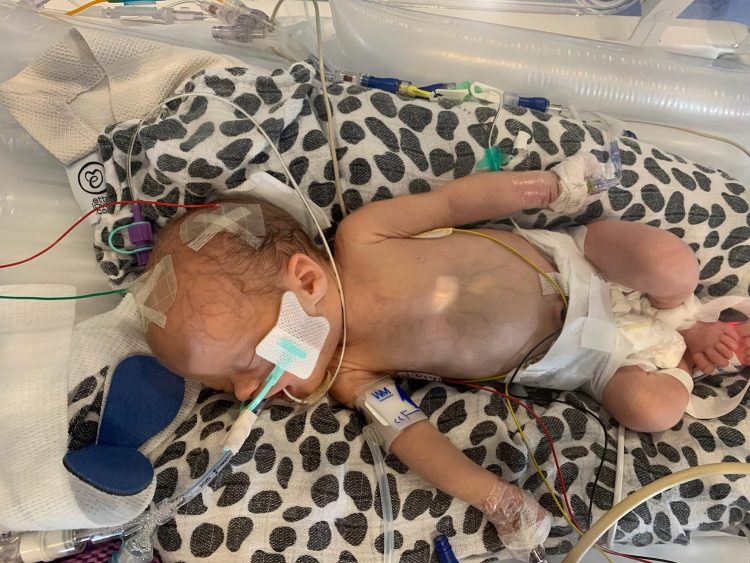 A mum who lost her baby days after contracting Covid-19 at 31 weeks pregnant has launched a fundraiser to help pay for a headstone.

Danakelly Taylor, 24, was rushed to Royal United Hospital in Bath after suffering complications in her pregnancy last year.

The problems were thought to be linked to Covid, which she believes she contracted whilst working at Zinc Night Club in Trowbridge, Wilts.

At just 31 weeks and four days pregnant, she gave birth to Maddison Angel Taylor-Mayne during an emergency caesarean section on August 4, 2021.

She was taken to the neonatal intensive care unit, but doctors told Danakelly, and her fiancé Joshua Mayne, 22, that their newborn was “healthy”.

But heartbreak struck when doctors realised Maddison was deteriorating, having also tested positive for Covid.

She was rushed to Bristol Children’s Hospital for special care after it was found that she had suffered bleeds on both sides of her brain.

Danakelly was unaware of what was unfolding. Doctors were forced to place her in a coma as they were unable to stop her bleeding following the birth.

She said: “She was doing incredible until things went bad and unfortunately Covid played a role in why she was ill.

“Maddison suffered two to three seizures that we were told was down to a very serious bleed on her brain called severe bilateral intraventricular and parenchymal haemorrhage.

“Unfortunately, we were told that she was very ill and we had to make the decision to turn off her life support machine.”

On August 7, just two and a half days after she was born into the world, the distraught parents made the heart-wrenching choice to remove her life support.

“We spent time with her and I even got to meet my baby and we even got to hold her”, Danakelly added.

“But her heart remained strong and slowly faded after three hours. She fought until the very end.”

After she died, Maddison was interred at the Down Cemetery in Trowbridge.

Danakelly and Joshua now wish to place a memorial headstone on her grave and have already saved several hundred pounds towards the cost.

The family have launched a public fundraiser on GoFundMe to help pay for the headstone.

“Me and her father Josh have made this GoFundMe appeal for a little help towards her headstone. We have already saved up as much as we possibly can.

“Her daddy is working himself into the ground to be able to give his daughter the headstone she deserves,” said Danakelly, who has an older child, Kaleb-Theo, aged four.

To donate to the appeal, go to: gofundme.com/f/maddison-angeltaylor-mayne-memorial-stone