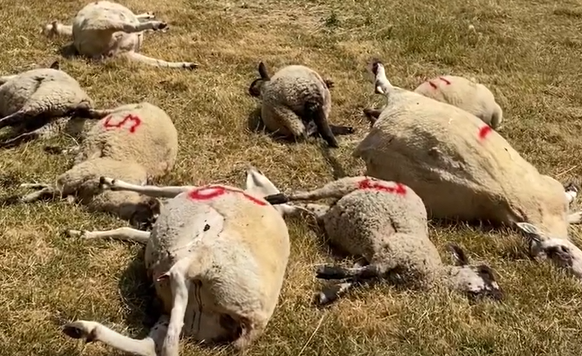 A teenage boy has been arrested after more than a dozen sheep were killed with a vehicle.

14 animals died as a result of a driver entering a field near Tollard Royal, southwest of Salisbury, and ploughing into them between 7pm and 6.15am on Sunday (17 July).

A 17-year-old boy was arrested in connection with the incident by Dorset Police, and has since been interviewed and released under investigation.

In a statement shortly after the incident, PC Sebastian Haggett said: “We are carrying out a full investigation into this matter and I would appeal to anyone with information that may assist our enquiries, including anyone with dash cam footage, to come forward.

“It is likely that this vehicle would of obtained damage through this incident.

“This is an appalling attack against a hard working farming community and against livestock. We will step up our patrols in the area.

“If you see a vehicle in a field and you suspect the vehicle may be committing offences such as illegal off roading, poaching or damage to crop I would urge you to ring 999.

Anyone with information is asked to contact Dorset Police by calling 101 quoting reference 55220115601. Alternatively, people can contact Crimestoppers anonymously on 0800 555 111.