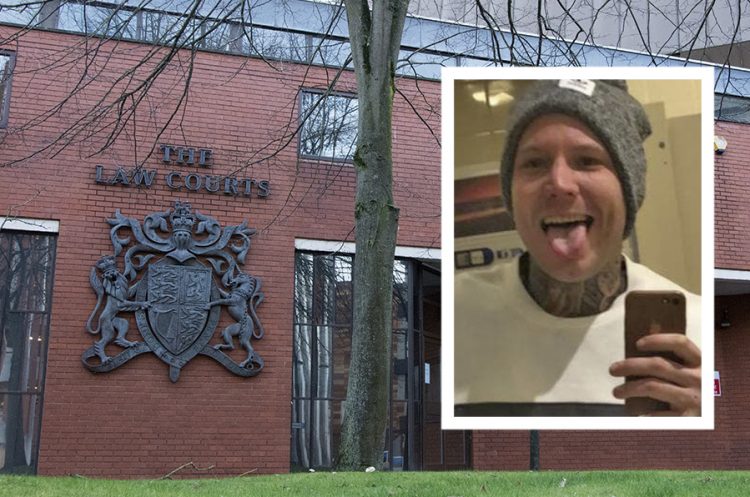 A serial domestic abuser wiped a child’s face in her mother’s blood during a violent assault at his home in Swindon, a court heard.

Crown prosecutor Tabitha Macfarlane said the defendant, of Melstock Road, Taw Hill, had been in a relationship with the woman for around four months. She, and her young daughter, had been staying at his five-bed house for a few weeks prior to the incident earlier this year.

In a statement, his victim told of how she met him on a dating app her new life with him had been “idyllic”. She added that she was aware that he smoked cannabis but had no concerns.

It was said that on 18 March, Bauld became “a bit of a zombie” after smoking what his victim believed was cannabidiol (CBD) oil in his vape device. He was using the vape in the early hours of the morning.

In the morning she and her daughter got up and ready to leave for the school run. The defendant, whilst the pair were near the front door of his property, came down the stairs in his boxer shorts. He was shouting and swearing, and the pair believed he was joking.

Moments later, he dragged his girlfriend to the floor by twisting her leg. Screaming in agony he then proceeded to punch her five or six times in the face, leaving her blind in one eye.

Her daughter, who was said to have never witnessed any violence towards her mother before, was then grabbed by the hair. He smashed her head together with her mother’s before he threw several punches towards his girlfriend, repeatedly striking her in the face once again.

During the sustained and violent attack, his girlfriend bit and scratched Bauld in an attempt to break free.

The court heard how the young victim’s face was wiped in her mother’s blood during the ordeal, leaving her “traumatised”, Ms Macfarlane said.

When the assault came to an end, Bauld shouted “I’m so sorry” before running upstairs. He was said to be laughing as he climbed the stairs.

Photographs, described as “shocking”, seen by the court showed a significant amount of blood at the crime scene. His girlfriend required stitches to her head and her daughter had clumps of hair missing.

During an interview in custody, the defendant said he believed the pair were stealing his money jar and a video game console. Adding: “If she was my daughter, I would have beaten the shit out of her”. He was said to be laughing throughout the interview.

In a letter sent to the Crown Prosecution Service, his adult victim said she did not support the prosecution and does not seek a restraining order.

She said his behaviour was “out of character”, despite knowing him for less than four months. She added that she does not feel scared by Karl and believes, deep down, he feels bad about the assault. “I felt safe and enjoyed being in his company”, she said. She continued to say that he had a good relationship with her daughter, but it was said her statement to the police contradicts the letter.

The court heard that Bauld has a previous conviction for putting a pillow over his ex-partner’s face before dragging her downstairs in 2013. He also assaulted a different ex-partner in front of a child – an attack which prosecutor Ms Macfarlane labelled “fairly disturbing”. Alongside other convictions – including a restraining order breach – there was also another assault, against another former partner. On that occasion, he was said to have laughed throughout the attack.

Defending, Emma Handslip said her client did appear “zombie-like” when she watched back the body-worn video footage from officers who attended the scene.

She added that Bauld is someone who has struggled with drugs and alcohol for many years. “Whatever was used [in his vape] that night had absolute catastrophic effects”, she said.

Confirming Bauld is employed as a scaffolder and has a stable home address, she said he’d taken positive steps in his life including admitting himself to rehab at a personal cost of £10,000 some years back.

Ms Handslip concluded by telling the court Bauld was “ashamed and disgusted” by his actions, and confirmed his victim wants to continue her relationship with him.

Taking into account the probation service’s view that he could not be managed safely in the community, Judge Jason Taylor QC sentenced him to 24 months immediate imprisonment.