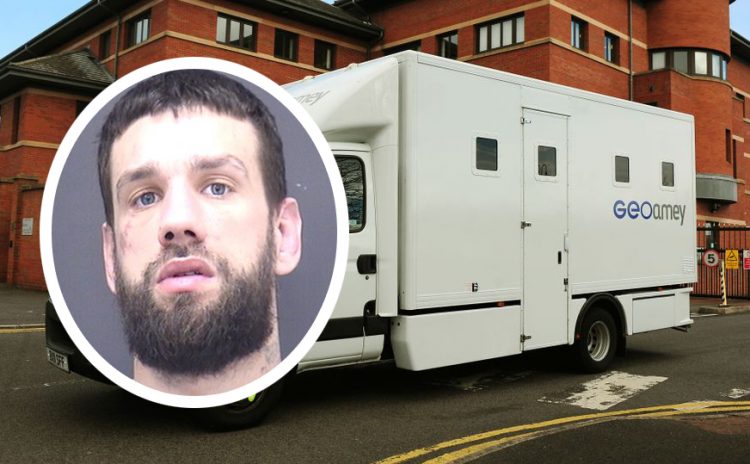 A man has escaped from a prison transport van – wearing only his socks and pants.

Kyle Darren Eglington, 32, escaped lawful custody at around 11.13am today (26/03) after assaulting security officers near Bournemouth, in Poole, Dorset.

He had been remanded in custody at Poole Magistrates’ Court on Friday, charged with robbery.

The suspect fled the prison van wearing only his socks and pants moments after attacking security officers in Hardy Road.

Dorset Police says it is carrying out “detailed searches in the area”. The police helicopter and British Transport Police are also involved in the manhunt.

Eglington is described as white, five feet eleven inches tall and of medium build, with dark brown hair and a beard.

“I would like to reassure members of the public that we have a number of officers carrying out searches and other enquiries in a bid to locate Kyle Eglington as soon as possible and return him to lawful custody”, Superintendent Heather Dixey said.

She urged members of the public to contact the force if they spot the suspect but warned them not to approach him.

“I would urge anyone who has seen a man in the area in just his underwear and socks, or who matches the description given above and appears to be avoiding detection, to please report it to us.

“There is nothing at this time to suggest he poses a risk to the general public, however, we would urge people not to approach him and to please dial 999 immediately.

“There will be an extensive police presence in the area as we carry out these enquiries and officers can be approached by members of the community with any concerns.”

If you see Kyle Eglington you should dial 999 immediately. Anyone else with information should call 101, quoting incident number 26:244 or Crimestoppers in confidence on 0800 555 111.