“It means so much to me”: Elderly bungalow fire victim thanks fundraiser donors 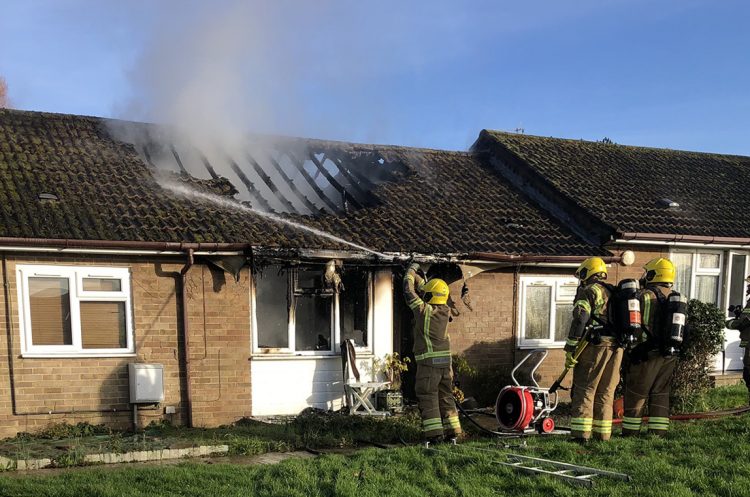 An elderly man who lost everything in a blaze on Christmas Day will be able to replace what was lost thanks to a Wiltshire 999s-organised emergency fundraiser.

85-year-old Anthony Chard was the victim of a devastating fire which destroyed his bungalow in Castle Meadow in Downton at around 12.30pm on 25 December.

Despite the best efforts of five fire crews from South Wiltshire and Hampshire, most of his possessions were completely unsalvagable.

On seeing photographs from the scene – whilst firefighters battled the blaze – the team behind Wiltshire 999s immediately launched the emergency appeal.

“The scale of the devastation was obvious”, news editor Daniel Jae Webb commented.

Adding: “It was clear that whoever lived there would have lost a significant amount of their belongings and was wanted to do something to provide support later down the line.”

77 generous readers donated a total of £1,340 to the fundraiser, hosted on GoFundMe, over the 24 hours that followed the incident.

Today (after GoFundMe deducted their fees for using the platform), £1,281 was handed over to Anthony, who is said to be overwhelmed by people’s goodness.

“I am amazed by the kindness and generosity of the community and from people who I have not even met”, he told Wiltshire 999s.

Continuing, he said: “It means so much to me. The funds will enable me to buy essentials for setting myself back up in my new home and getting me back on my feet.”

Anthony’s home severely fire damaged, he’s currently living in temporary housing but will be moving back to the area (to a different property) in the coming weeks.

Dorset and Wiltshire Fire and Rescue Service, commenting on the incident at the time, said the blaze was probably accidentally.

At the scene, Fire Investigation Officer (FIO) group manager Katie Cornhill said: “The most probable cause appears to be accidental.

“The elderly resident of the property was led to safety by neighbours who heard the smoke alarm activating. The occupant of the premises was cared for by ambulance service colleagues on the scene.

“We would never advise anyone to go into a fire before we arrive, but on this occasion the neighbours were lucky to be able to help the resident and we are very grateful for that.”

Smoke alarms really do save lives and serve as an early fire warning. Dorset and Wiltshire Fire and Rescue Service recommends that occupiers have a smoke alarm on every level of their home. Smoke alarms should be tested regularly, and the batteries replaced annually or as directed in the manufacturer's instructions.

More information on smoke alarms and home safety can be found on dwfire.org.uk.