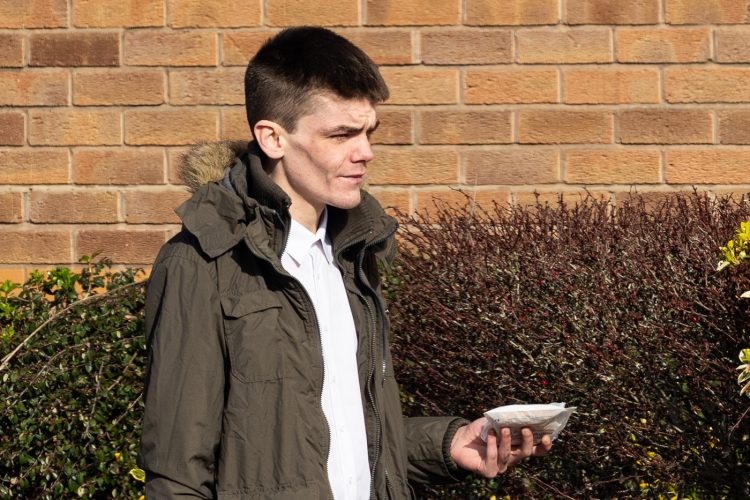 A drug user has admitted flicking his blood over three police officers after jumping out in front of cars.

Pauline Lambert, prosecuting, said police responded to reports of a male jumping into the path of moving vehicles on County Road in the early hours of yesterday morning (14 June).

Whilst on scene, the defendant behaved aggressively towards the officers – who were trying to calm him down – before he punched the door to the building in which he rents a room.

His punch resulted in the glass panel smashing and injuring Gunn, who was left with a laceration to his hand which was described as “gushing” with blood.

He continued shouting and screaming abuse at the officers, whilst flailing his arms around in anger. As a result, three officers were left with blood on their bodies.

In his statement, PC Samuel Westerby said some of the blood landed just centimetres from his eye.

He said he would “rather take a punch or a kick” than be covered in blood by a known drug user. PC Westerby added that he felt “deeply concerned” for his health following the incident, but was relieved to hear that Gunn is not believed to have any contagious diseases.

His colleagues, PC Whitley Ellingham and PC Adam Michell, both had blood on their bare skin and across their uniforms.

In custody, the defendant said he was “having a bad day” and that he doesn’t get on with the police because they are “bullies”. He said that when they arrived, he “got more and more annoyed” but claimed he “felt like a c**t” afterwards.

Gunn is currently serving a suspended sentence order for assaulting his girlfriend before spitting in the face of an 11-year-old girl who was passing the attack on her bicycle.

Gordon Hotson, defending, said his client – who he described as a “vulnerable adult” – recklessly assaulted the officers by flicking blood on them and “wasn’t trying to do that deliberately”.

He asked the court to defer sentencing so that Gunn is able to complete his ongoing autism assessment and start a thinking skills programme with the probation service.

Probation officer Michelle James said the defendant was in emotional distress at the time of this incident, adding that he has recently been found on motorway bridges and multi-storey car parks. She supported Mr Hotson’s application for a short deferral.

Magistrates agreed to a three-month deferral, with condition that he attends his autism assessment and thinking skills course. If Gunn commits any further offences, the deferral will come to an end and he will be sentenced for his crimes – which will likely result in an immediate prison term.

When the deferral comes to an end, he will return to court to be sentenced.