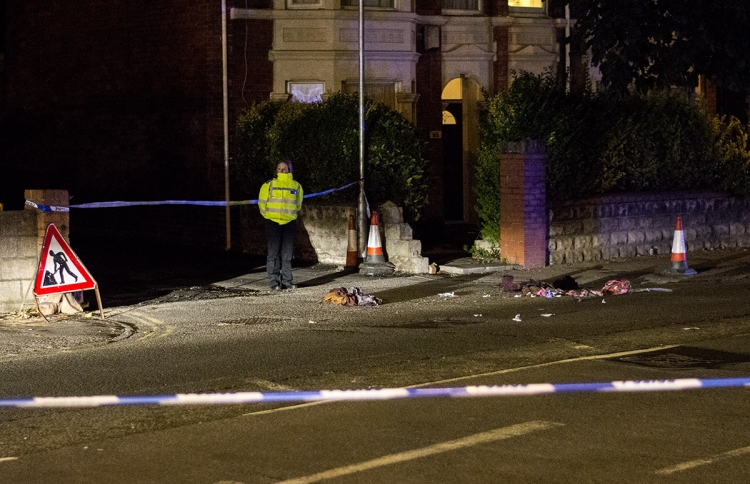 THE SCENE ON COUNTY ROAD ON SUNDAY

A woman’s suffered a fractured skull after being hit by a vehicle which failed to stop in Swindon.

It happened in County Road, near the junction with Manchester Road at around 9pm, where the casualty was found in the road by a member of the public with serious injuries.

Two air ambulance crews, travelling in rapid response vehicles, and doctors from SWIFT Medics were called to the scene to assist local ambulance crews already at the scene.

The casualty, in her 30s, was taken to Southmead Hospital in Bristol by ambulance.

Last night, police at the scene were unsure of the circumstances leading to her injuries and erected a large crime scene which closed County Road in both directions until 7am.

Usually, an investigation into a road traffic collision would be headed up by Tri-Force Roads Policing, however, detectives from Swindon CID are leading this injury.

DS Adrian Bray said: “At this early stage of our investigation we believe the woman has been hit by a vehicle, perhaps a car or van, which has failed to stop and left the scene.

“We want to hear from anyone who was in the County Road area either shortly before or at the time of the incident. We have had some reports that the victim may have been stumbling in and out of the road, so we want to speak to witnesses who may have seen her before she was injured.

“We also want to hear from motorists who may have dash cam footage, which may hold vital information about what happened and provide further detail about the vehicle involved in the collision.”

Anyone with information is asked to contact Swindon CID on 101, quoting log 309 of yesterday. Alternatively you can call Crimestoppers anonymously on 0800 555111.