Boy, 15, stabbed and two others seriously hurt in Swindon incident 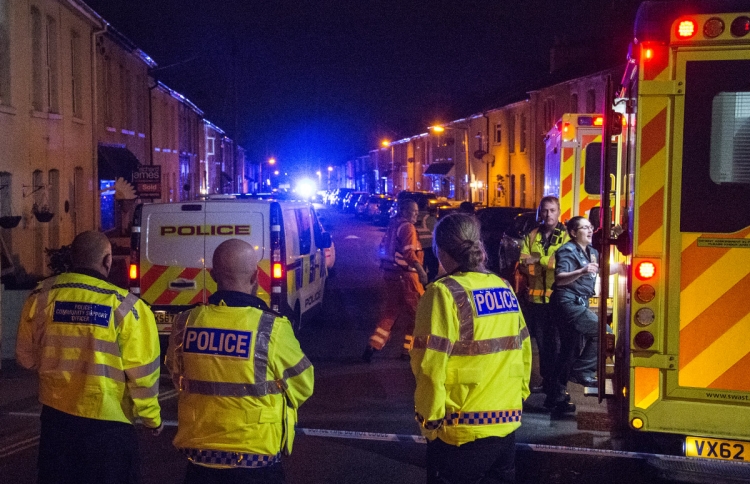 999 CREWS AT THE SCENE TONIGHT

A 15-year-old boy has been stabbed, and two others have suffered serious injuries after a road traffic collision turned into an fight involving a machete in Swindon last night.

Emergency services were called to Clifton Street in Old Town at just before 8pm, following a two-vehicle crash involving a black BMW and a black Mercedes private hire taxi.

Following the minor collision, a disorder broke out in the road. A 15-year-old boy suffered a stab wound to his chest, a 22-year-old man sustained a head injury and a 29-year-old man suffered serious leg injuries. None of their injuries are believed to be life-threatening.

Det Sgt Adrian Bray, from Swindon CID, said: “This was a large-scale disorder which involved a number of people, who we believe were known to each other.

“Part of Clifton Street remains closed this morning while we continue our investigation.

“Due to the nature of the incident and the fact that weapons were recovered at the scene, dog units and armed police officers were deployed to the area last night to carry out searches and look for suspects.

“Our enquiries are continuing today so we do not want people to be alarmed if they see an increased police presence in the area.

“We want to hear from anyone who was in Clifton Street last night and who saw the collision or the disorder. If you have CCTV footage or dash cam footage then this could be useful to our investigation so please get in touch.”

A 20-year-old local man has been arrested on suspicion of causing grievous bodily harm with intent and causing serious injury by dangerous driving and is currently in custody at Gablecross Police Station.

One man, who gave first aid to a casualty at the scene but didn’t want to be named, told Wiltshire 999s: “I heard the commotion down the road so I went down to help. Two of the men looked to have serious injuries and were being seen to so I helped the man who had a broken leg in three places.

”I don’t know what happened but there was a machete in the road.”