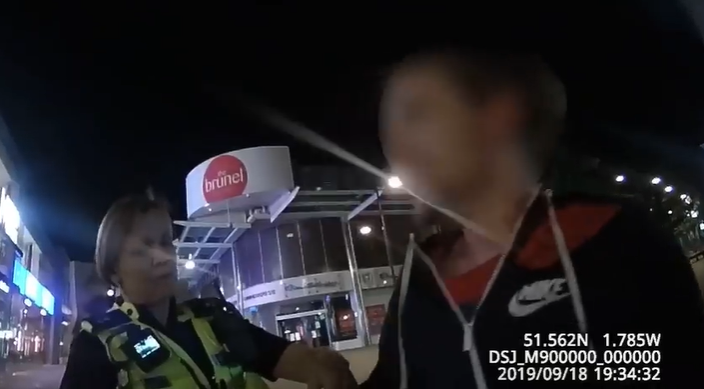 A armed man who was stopped by journalist Daniel Jae Webb during an altercation in Swindon town centre last night has been arrested for numerous offences including assaulting police.

The incident happened at around 8.25pm last night, Wednesday 18 September, and involved two males who are alleged to have been fighting outside Vodafone on Canal Walk.

Wiltshire 999s founder Daniel ran towards the ongoing incident and intervened, stopping a man allegedly armed with a metal stick – used as a weapon – from leaving the scene on his bicycle.

Police officers were on scene within minutes, arresting a 32-year-old local man on suspicion of affray, possession of a Class C drug and three counts of assaulting an emergency worker.

Last night I came across two males fighting in Swindon town centre. Ran towards the incident to intervene. Male 1 was armed with metal stick and using it against the Male 2 in a stabbing motion. Managed to hold him as police arrived. Footage* from two minutes into the incident. pic.twitter.com/Fk5nO83IaV

He remains in custody at Gablecross Police Station this morning.