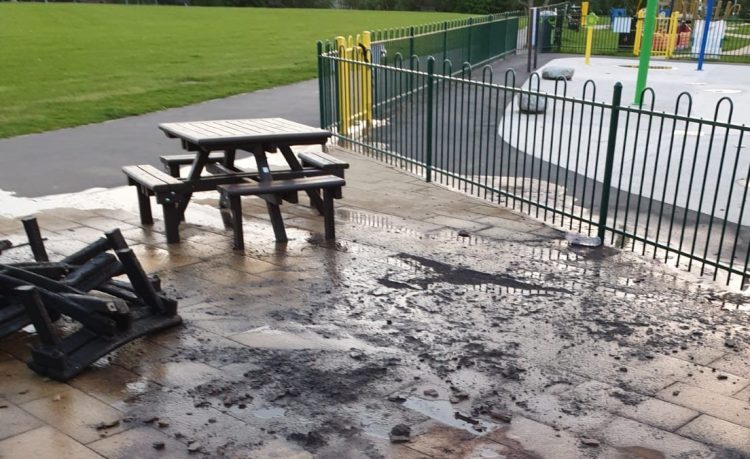 Wiltshire Police says it has identified the youth responsible for an arson attack at a park in Melksham yesterday evening.

Firefighters were called to reports of a bench ablaze next to the newly opened splash pad at King George V Park at around 9pm.

In a post on social media, police sergeant Twyford said they had seen the ‘best and worst of the town’s youth’.

“As many of you will know, a bench was set alight at the newly opened Splash Pad, which has caused a great deal of damage to the immediate area”, he commented.

“The person responsible has been identified and will be dealt with. It is a juvenile, so we are limited in what we can publish, but rest assured that we are as frustrated as everyone else by this person’s deliberate actions.

“At completely the other end of the scale; two girls were quick to react and call the Fire Brigade; whilst another boy managed to drag the burning bench away from the building. This selfless behaviour has doubtlessly saved the damage from being much worse.”

Melksham Town Council has confirmed the splash pad and cafe will remain closed today, Bank Holiday Monday 31 May, following the incident. It is not yet clear when it will reopen.

“We are very sorry to report that the splashpad and cafe at [King George V Park] will not be open tomorrow due to a fire. The cause of the fire was a deliberate act of arson; the police have the CCTV footage and are investigating.

“We know how disappointing this is for everyone but we will work hard to get things back to normal asap.”