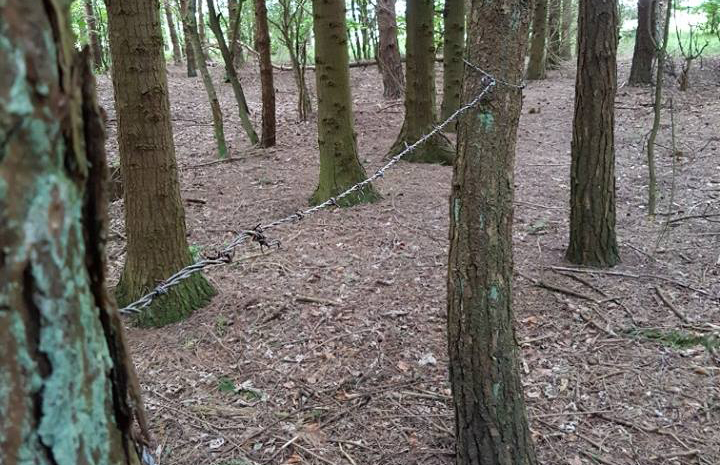 A number of unofficial off-road biker deterrents erected on Salisbury Plain could have proved fatal, according to a spokesperson for Wiltshire’s rural crime team.

Barbed wire was discovered strung up between trees within a plantation in the area on Wednesday 16 May, when an incident was reported to police close to Bravo Crossing in Netheravon.

PC Marc Jackson, of the Rural Crime Team, said: “The consequences of this act could have proved fatal had a motorcyclist collided with the barbed wire. This is not the first time such tactics have been used to try to target off roaders.

“The continued use by off-roaders in the woods, plantations and along tracks on Salisbury Plain is becoming a real cause for concern amongst other users of the plain, and while we appreciate this is causing tension, resorting to such methods is not acceptable and anyone caught placing items which may cause harm to other individuals can expect to be prosecuted accordingly.

“The majority of off-roaders respect Salisbury Plain and act lawfully within the Bylaws and Road Traffic Act. However, the small majority still continue to abuse the Plain and use areas which are not open to the public. I appeal to those individuals to stay out of the areas where public access is not granted. For your own safety, stick to the public rights of way.”

The Ministry of Defence confirmed no knowledge or involvement in the act.

If anyone has any information in regards to the individuals who have placed this barbed wire in the woods, or any further items across the Plain which may cause harm to off-roaders, please call police on 101, or Crimestoppers anonymously on 0800 555 111.