James Richardson, 34, was sentenced to 24 years imprisonment for the two attempted murders 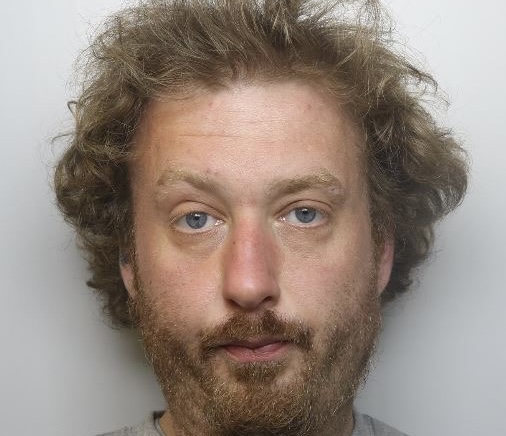 A man bludgeoned both his elderly parents to near-death with a crowbar after his dad refused to give him money after being evicted from a Wiltshire hostel.

James Richardson, 34, began the vicious attack on Janet and George Richardson, both 69, when he went to collect some belongings from their home in Yatton, Somerset, on 10 April this year.

The defendant – who had been evicted from Kingsbury Square Hostel in Melksham on 9 April – was with his father in the garage when his request for cash was rejected, a court heard.

He then picked up the weapon and struck him over the head while his back was turned before hitting him again after he fell to the floor.

Moments later, the defendant turned his attention to his mother, Janet. He struck her over the head with the crowbar three times until it became embedded in her skull.

On hearing screams, neighbours ran over to the property and discovered the pair seriously injured as Richardson was witnessed walking away from the scene.

Prosecutor Rachel Drake said following the incident, Richardson called Latasha Sheppard, a woman he had befriended at the hostel he had been staying at.

She recalled him sounding out of breath and running as he claimed “I’ve just done a double murder” down the phone.

The court heard his mother sustained underlying compressed skull fractures with significant life-threatening hematomas, which were putting pressure on her brain. Surgery was required to alleviate the pressure.

Since the assault, Mrs Richardson has struggled with reduced cognitive function and requires two-on-one support. It is not clear whether she will ever fully recover from her injuries.

His father suffered a fractured skull and elbow, requiring surgery.

The day prior to the attack, he had contacted a friend threatening to chop his parents’ heads off, stating to her that he would do anything to get a name for himself. He also mentioned killing a rich Australian coupe and the devil.

The court heard how Richardson – who had used cannabis from the age of 15 – had previously assaulted his parents, and by his own admissions, attempted to kill them on four occasions.

In a police interview following the attacks, he said: “I am a psychopath. I live in hell; the devil wanted my parents dead.”

Ms Drake said Richardson knew what he did was wrong, and as a result, could not use an insanity defence.

He has spent long spells in mental health hospitals having been diagnosed with schizophrenia, including a six-year stretch between 2013 and 2019.

Six months before the attempted murders, the defendant was discharged from the community mental health team after telling a nurse he wanted to stop his medication because he did not believe he had psychosis.

Psychiatrist Dr John Sandford told the court Richardson was not displaying symptoms of schizophrenia at the time of the offences. Adding that the disorder was not the cause of his actions on 10 April.

Defending, Harry Ahuja asked that his client is sent to prison where he “felt more comfortable” rather than be detained in a psychiatric hospital.

“He felt more settled in prison”, he said. “He was keen for the court to sentence him to an immediate custodial sentence.”

Judge Lambert described the defendant’s actions as “chillingly premeditated” as he handed down a 24-year custodial sentence with an extended licence term of five years.

He made an indefinite hospital order alongside the custodial sentence, meaning Richardson will serve the first part of his sentence in a secure hospital facility before being transferred to prison when appropriate.

“You have had near-constant conflict with your parents since you were a teenager”, he said.

He added: “Drug abuse is the route cause of your problems.

“You have made the lives of your parents a living nightmare and you have previously made attempts on their lives.

“You acknowledge attempts to kill your parents on four occasions.”

Judge Lambert said the messages he sent to his friends show his actions were premeditated.

He added: “There is little evidence there were active symptoms of schizophrenia at the time of the offences.

“They were chillingly premeditated, you admitted premedication in your statements at the time. These are premeditated hideous offences.

“You are dangerous, very dangerous, and you will be for a long time, there is a high risk to members of the public.”