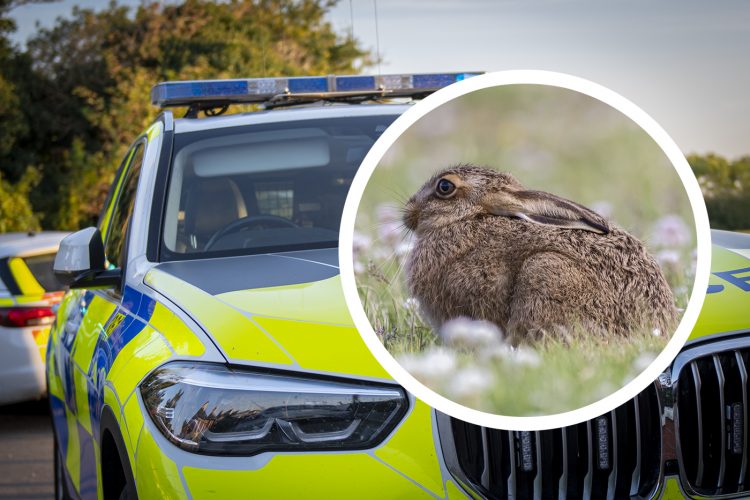 Six people are in custody arrested on suspicion of hare coursing following a pursuit from Hackpen Hill to Beckhampton.

At approximately 2.30am this morning, officers spotted two vehicles on Hackpen Hill – one of the vehicles had a defective rear brake light and no insurance.

Dogs were also seen in the rear of the vehicles. Officers attempted to stop both vehicles however both failed to stop and left the scene at speed towards Broad Hinton.

High powered lamps were used from the rear of the vehicles in an attempt to blind the officers, whilst reaching speeds of up to 90mph towards Avebury.

A pursuit was authorised and both vehicles made off towards Beckhampton where they went the wrong way around the roundabout before heading along the A4 towards Calne.

The vehicles were eventually lost to sight along a byway near Yatesbury. However, officers contained the area and the two vehicles were located on a byway in Broad Hinton where they attempted to reverse ram a police vehicle.

The occupants eventually decamped from their vehicles with their dogs in a field near Hay Lane. With assistance from the police helicopter (NPAS), officers located the men hiding in a field.

Six men were arrested on suspicion of dangerous driving, failing to stop and hare coursing. They are:

All six men remain in Gablecross custody for questioning and nquiries are ongoing. The dogs, and both vehicles, have been seized.

Superintendent Phil Staynings said: “Once again this is an excellent example of officers across the county and the National Police Air Service working closely together to locate individuals suspected of hare coursing, despite attempts to evade police.

“The manner of driving during the pursuit was extremely dangerous – it is fortunate that this incident happened in the early hours of the morning when the roads were relatively clear.

“I’m really pleased that the persistence of our officers paid off, and we now have six individuals in custody arrested on suspicion of hare coursing, dangerous driving and failing to stop.

“We continue to crack down on hare coursing in Wiltshire and our rural crime team is continuing to work closely with local officers to ensure we respond quickly and effectively to any reports of suspicious behaviour.

“Our message remains clear – if we suspect anyone of hare coursing in Wiltshire, we will act swiftly and efficiently.”