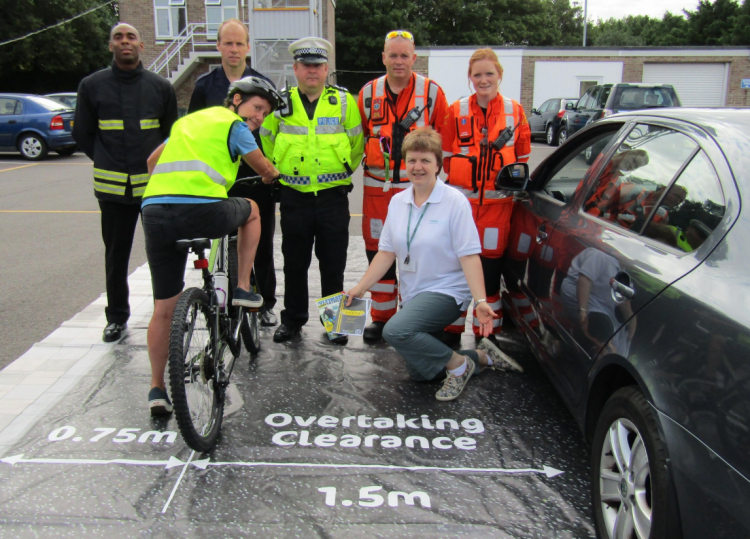 An undercover police officer has been riding a camera-equipped bicycle on a road that claimed the life of a cyclist recently, in a bid to catch dangerous drivers.

Motorists were reminded to consider the safety of cyclists yesterday, when they were pulled over by police as part of Wiltshire’s second Operation Close Pass.

Originally launched by West Midlands Police, ‘Close Pass’ is a national campaign aimed at targeting those motorists who do not leave sufficient space whilst overtaking cyclists.

During the operation, a specially equipped pedal cycle, with cameras both front and back, was ridden along Hilperton Road, Trowbridge, the same road that tragically saw the death of a cyclist only a few months earlier.

Anyone deemed to have passed too close to the cyclist was subsequently stopped by uniformed officers and given a short lesson on sharing the road space safely. Alongside education, officers also looked at both driver and vehicle legality, vehicle condition and the eyesight standard of those drivers stopped.

Officers from both the Tri-Force Roads Policing Unit and Road Safety Unit were supported by members of the Special Constabulary, and a number of staff from the Swindon and Wiltshire Road Safety Partnership, which includes Dorset and Wiltshire Fire, Wiltshire Council and Paramedics from Wiltshire Air Ambulance, who delivered the educational aspect of the operation. The operation was also supported by Cycling UK who provided equipment.

A total of 38 drivers were stopped, with the majority of these being in respect of Close Pass.

As well as education, the operation also saw three Fixed Penalty Notices given for number plate and seat belt matters, two drivers reported for driving without Insurance and, following vehicle examinations, various words of advice were given regarding vehicle condition.

Sergeant Simon Drewett said: “It is important that we continue to educate drivers about the need to share road space. Sadly, we have already seen the tragic deaths of two cyclists on the roads of Wiltshire so far this year. In addition, there have also been a worrying number of riders injured, some seriously.

“It is apparent that motorists appear not to give those most vulnerable on our roads either enough space or time to use the roads in safety. At 30mph, drivers should allow at least 1.5m of clear space between their vehicle and a cyclist whilst overtaking. This distance only grows with increasing speed.

“Whilst Operation Close Pass has a number of aims, it is primarily about educating the motorist in safe passing distances, something that drivers often have difficulty in judging whilst sitting behind the wheel. By showing them the marked out distances, drivers can put themselves in the place of the rider to appreciate just how much room is necessary in order to pass in a safe manner.

“We are simply asking motorists to be more considerate and through understanding both safe distance and time, to make the roads safer as a result.”