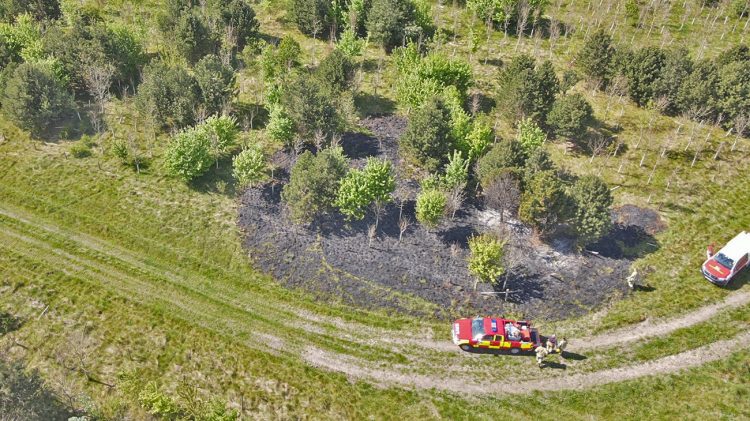 The military managed to stop a ‘rapidly spreading blaze’ on Salisbury Plain on Saturday.

The fire started after an unattended fire pit, dug and lit by illegal campers, spread to nearby vegetation within a plantation of young fir trees.

Due to high winds, the flames began spreading at an alarming rate – but range staff and the person who reported it managed to control the fire before it reached a nearby road.

The fire service also attended the scene north of Durrington, dowsing down the embers to prevent them from reigniting.

An investigation was launched by the Ministry of Defence, which was able to conclude – due to food and a wine bottle alongside the fire pit – that the blaze was not caused by military training.

A Salisbury Plain Training Area (SPTA) spokesperson said: “On investigation, it appeared that it was started by an unattended fire pit that had been dug by members of the public that may have camped there overnight.

“Military training was ruled out due to there being remnants of corn-on-the-cob and a wine bottle next to the pit.”

The spokesperson said those who camped out on the training area broke numerous bylaws.

“The people responsible had contravened most of the bylaws: entering plantations, camping, digging, starting fires, leaving rubbish, removing signs (there were remnants of a signpost in the ashes), chopping branches off the trees, to name but a few of the laws that were broken.

“With the spell of dry weather we are having, please be considerate to the environment.

“We are currently on a pyrotechnics ban on military training. Any unit wishing to use anything other than blank ammunition must gain special dispensation and have robust mitigating measures in place.